In the first part of the tutorial, we built the simplest form of the text editor where we can just type some text. In this part, we will be adding features to add basic text styling to the characters.

We will start by adding a functionality where one can add bold, italic and underline styles to selected text by pressing the stand keyboard shortcuts for those, i.e

We are using draft-js-plugins editor which allows us to build various plugins and pass them to the Editor component. We can choose to either create a single plugin with all the functionalities in it or build multiple plugins with single functionality in each. For this tutorial, we will be following the latter approach.

There are various handlers and properties that the Editor component can be passed for different kind of events. You can read the documentation here. draft-js-editor helps us in using these handlers in each of the plugins that we create.

The way Draft-js works is that instead of directly relying on browser’s contenteditable API, it treats each keypress as an input. Then it analyzes the key combination and based on that it generates an output and renders it in the contenteditable. Internally, on each keypress, a string signal is generated which is then analyzed and output is rendered.

Now that we have understood how draft-js works, let’s start by creating a plugin that handles keyboard shortcuts mentioned above. Draft-js has a utility method that detects common key combinations and emits desired signal strings. For example, when CMD+B is pressed on Mac, it emits string - bold. So we will be using this utility method to add basic styling to text using keyboard.

Simplest draft-plugin-plugin is just on object with all or some of the handlers that you want to use. We will be using the keyBindingFn handler of Editor to add B, I, U styling. Let’s start by creating a plugins directory inside src. Now create a file called basicTextStylePlugin.js inside plugins and add the following code –

Above code creates the simplest form of draft-js-plugins where it is an object with the handlers to use, here, the handlers are keyBindingFn and handleKeyCommand. In each of the method of draft-js-plugins, besides the default argument passed by draft-jss Editor component, a second argument is also passed which is an object that has the getEditorState and setEditorState methods which we are using in handleKeyCommand to modify the content.

At this point, your directory structure will look like this – 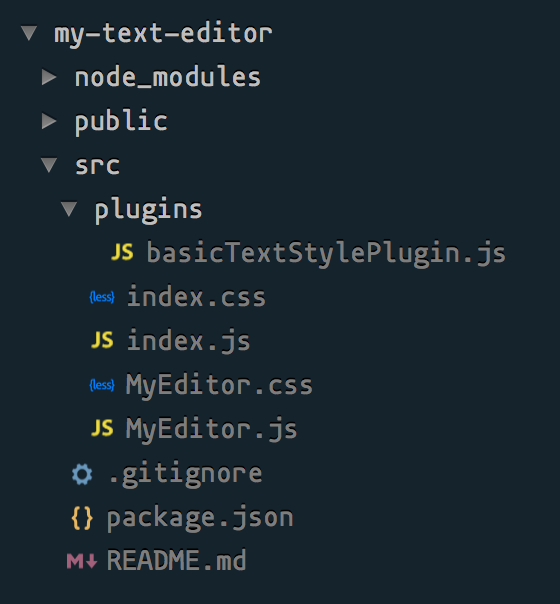 Now, you can open your dev server @ http://localhost:3000 where you will be able to select some typed text and press CMD+B to make the selected text bold.

At this point or even at the end of previous tutorial, you may have gotten a warning message in the console like this Warning: Accessing PropTypes via the main React package is deprecated. Use the prop-types package from npm instead.. This is because we are using the latest version of React from which PropTypes have been removed to another package called prop-types and other libraries (draft-js and draft-js-plugins) are using the old PropTypes. This is nothing to be worried about.

This completes the 2nd part of the tutorial. In next part, we will learn about entities and implement adding a link to the selected text.

You can get the source code from this GitHub repo . The code for this tutorial can be run from the part2 tag. After cloning the repo, you can do